As small predators of the shallow reefs around Phuket, harmless to humans, bamboo sharks play an important role in the ecosystem by maintaining the species below them in the food chain and serving as an indicator for the reef’s health.

By taking sharks out of the coral reef ecosystem, its entire balance is at risk.

From December 1, 2022, Pullman Phuket Panwa Beach Resort, OFA foundation and the PMBC (Phuket Marine Biology Centre) will help hatch the eggs in an aquarium at the lobby of the resort, rather than in the open sea where they are vulnerable to other predators. When they are about 4 to 6 months old, they are released into the sea to provide them with a size advantage, which may increase their lifespan.

We invite you to come and discover more about these lovely creatures right at the lobby of Pullman Phuket Panwa Beach Resort. 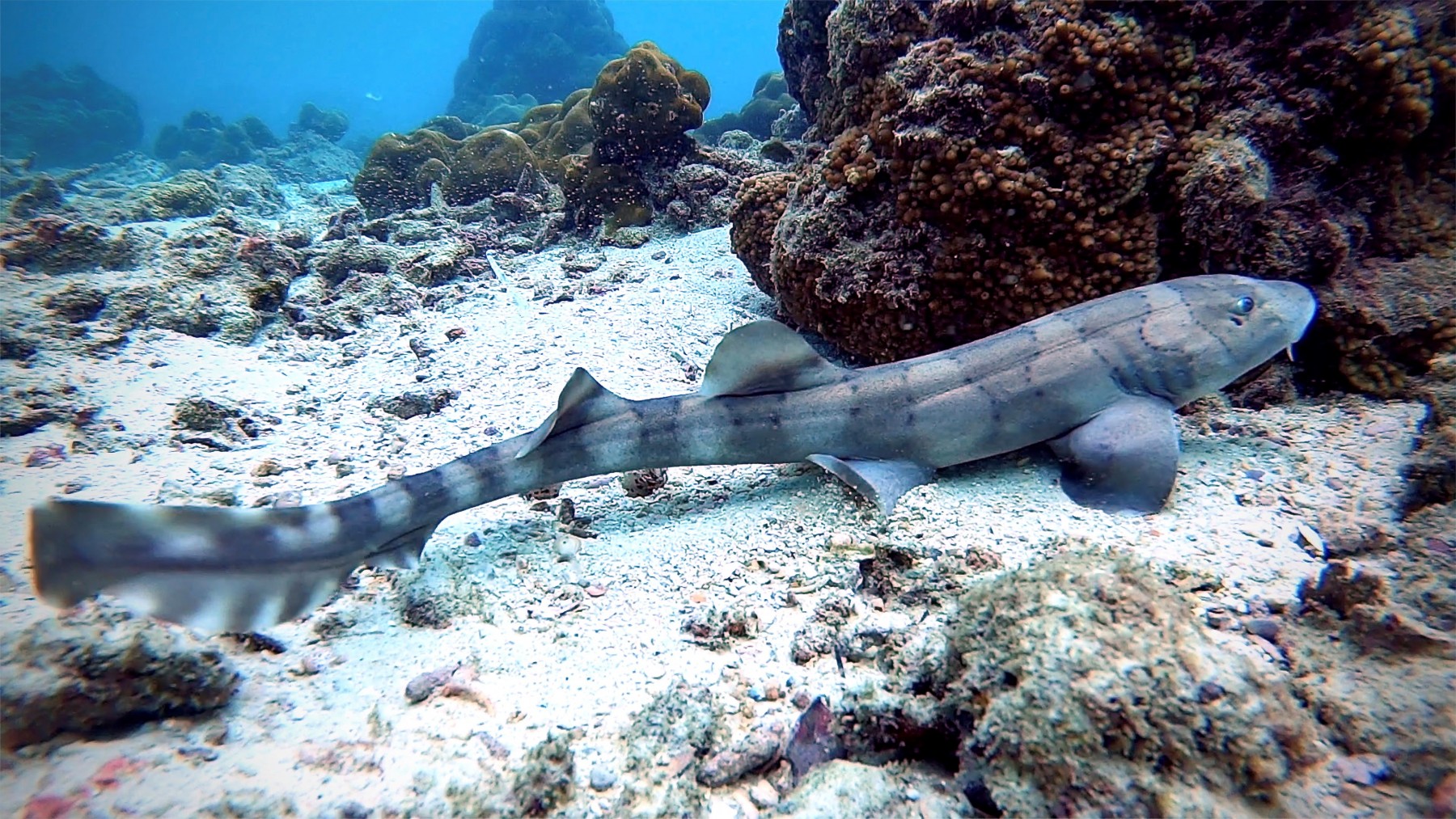 What is a Bamboo shark?

The bamboo shark (Chiloscyllium punctatum) is a small benthic shark species native to the Gulf of Thailand.  It can also be found across Southeast Asia, northern Australia and Japan.

Bamboo sharks can grow up to 1 meter in length as an adult and live about 20 years.

They feed on invertebrates like crabs and small fish on the reef. They pose absolutely no threat to humans.

Their presence in shallow reefs is extremely important as they help keep the fragile ecosystem in perfect balance.

The bamboo shark became an endangered species a few years ago due to its popularity with fish collectors and exotic food enthusiasts. Pollution and overfishing are big threats to their survival as well.

• Bamboo sharks are active mainly at night and sleep during the day in the crevices of coral reefs, in shallow waters.

• Bamboo sharks are oviparous.  The eggs are enclosed in elongated, flattened shells.  They can take up to four months to hatch.

• Because they often hunt in tide pools, these sharks can survive up to 12 hours out of the water.

We would like to thank you for being a guest at PULLMAN PHUKET PANWA BEACH RESORT, as you are contributing to the shark breeding program, and the mission to restore the population of these animals and the well-being of Phuket reefs.

Be part of the solution.

Together let’s make a difference!

Share this article
View all photos
Book a room

1. The “Save 40% Book with Confidence” offer includes a 40% accommodation discount on the fully “flexible rate” at the time of booking, as well as 4X Reward points.
2. The 4X Reward points are available to those who are members of ALL Accor Live Limitless at the time of booking. Non members ca n join ALL instantly at no cost here .
3. To earn 4X Reward points, ALL members must register for the offer prior to booking by clicking on the ‘Register now’ button o n t his offer page and then following the
instructions listed. (Registrations for the offer can be made between 12:00 AM on 21 August 2020 and 11:59 PM on 25 September 20 20 Central European Time. Time.)
Additionally, to earn 4X Reward points, ALL members must provide their membership number when making their reservation and pr ese nt their membership number or
card when checking in for their stay.
4. One must book the “Save 40% Book with Confidence” rate to avail of the 40% discount and 4X Reward points. Stays booked via a reseller, tour operator or third party
online travel agent are not eligible for 4X Reward points.
5. Accor Plus members are entitled to an additional 10% discount on accommodation.
6. The offer is valid for reservations booked between 21 August 2020 and 25 September 2020 for stays between 1 September 2020 a nd 15 December 2020 at parti cipating
hotels in Thailand. The offer is subject to availability.
7. 100% of the reservation must be paid at the time of booking. The reservation is 100% refundable if cancelled no less than 3 days prior to arrival.
8. This offer entitles ALL members, regardless of their status level, to multiply the Reward points they earn by 4, when staying at hotels in Thailand who are participating in
the offer and ALL. The Points are earned based on the value of points credited to the member by the hotel following an eligib le stay and are based on the Classic status
level. On completion of the stay, points will be credited to the member’s account in two separate transactions: 1/ the points corres pon ding to the value of points that the
ALL member would have been awarded had they not subscribed to the offer will be credited to the member’s account in the first tr ansaction; and 2/ the additional Reward
points earned by registering for the offer will be credited to the member’s account in the second transaction, corresponding to the number of Reward points the ALL
member is still owed in order to have been credited the total number of Reward points multiplied by 3 on completion of the tw o p oints credit transactions. For example, an
ALL member who earned 250 Status points and 250 Reward points for an eligible stay will receive an additional 750 Reward poin ts. The Reward points will be credited to
the member’s account within 10 days of the member checking out.
9. To the extent permitted by law, Accor reserves the right, in its sole and absolute discretion, to amend, modify or alter the ter ms of this offer, including the list of
participating hotels, at any time.
10. ALL Terms and Conditions of Membership and Accor’s General Terms and Conditions of Services apply to this offer. In the event of any conflict between these offer terms
and conditions and Accor’s General Terms and Conditions of Services, these offer terms and conditions will prevail.
11. Please specify the reference 012630 in all your communications with ALL call centers or customers care services related to this offer.

The best of Pullman with Accor App Close